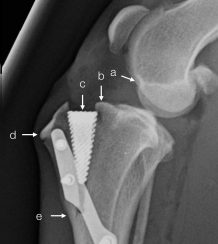 TTA was first described by Maquet in 1976 to reduce patellofemoral contact pressure in human knees with patellofemoral pain. TTA has never been used in humans as a treatment for cranial cruciate ligament (CCL) insufficiency. The concept of TTA being used for canine cruciate disease was proposed by Montavon and Tepic in 2002, and is based on a mechanical model of the human knee by Nisell in 1986. Nisell assessed cranial tibial thrust throughout human knee flexion and described a “crossover point” at which the cranial tibial thrust was neutralised. This crossover point has been shown in the dog to occur when the patellar tendon angle is approximately 90 degrees to the tibial plateau angle.

When planning a thicker crest cut, use Gerdy’s tubercle as the caudal limit. Gerdy’s tubercle can be seen on a mediolateral stifle radiograph as a bone prominence immediately cranial to the tibial plateau and long digital extensor tendon sulcus.

Want to learn more about how and why Dr Brent Higgins and Seamus Tredinnick created OssAbility, and their vision for the future of veterinary orthopaedics?

Thanks VetScript for allowing us to share with the VetPrac community this article from VetScript December 2017.

If you’d like to learn how to use this state of the art technique in your own practice, join us at the join us at the Ossability Stifle System workshop 9 – 10th February 2018.

The techniques for cruciate repair keep evolving and each one has its place.The one thing everyone wants is a reliable method that can be used in most patients to increase the functionality of the limb and reduce their pain. The Ossability Stifle System has engaged engineering principals and high levels of personal supportive guidance to ensure your patients have successful outcomes. An evolution on the original TTA with improvements that address complications seen in other methods, this is a technique VetPrac is proud to bring the Australian veterinary community.