Puppies and behaviour, goes hand in hand, right? But when a dog/puppy develops behavioural issues that require medical management and training, who better to own that pet than a behavioural Vet?

Meet MERV (or ‘Mervous’ as Tracey’s friends call him).

To say he’s a handful is a bit of an understatement. It’s just as well his owner is none other than Dr Tracey Henderson – founder of Australian Veterinary Behaviour Services and educator extraordinaire at VetPrac Bootcamp Workshop on October 16-18, 2020.

Merv is now 6 years old and owned by Dr Tracey herself. He is a massive 75kg St Bernard that has a mental health disorder! Oh and also bilateral hip and elbow dysplasia and a repaired cruciate rupture. Besides that he is healthy – lol!!! His parents were all clear for all screening.

Tracey has provided VetPrac with an honest account of her experiences with Merv. Who says vets don’t own a disproportionate number of fur babies with major health issues???

“We drove to NSW (from SA) to pick Merv up as a 9-week-old; we sent an Adaptil collar in the mail for him to wear a few days before hand. I drove as I didn’t want him to fly because he was in a normal developmental fear period, and I didn’t want him to develop behavioural issues later on. Merv has another doggy friend and lives on a farm with our family. 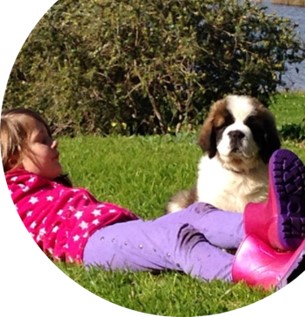 At 10 months old, Merv started to show some anxiety signs. His problems included escaping the yard (I found him hanging by his hips on the gate), fear of going into the yard (as soon as I shut him in he would be panicking and trying to get out), and anxious during car travel and unfamiliar environments. He stopped playing and just wanted to get inside as he was generally anxious when outside of the house.

Being my own dog, it took me a while to acknowledge that Merv had a VERY big problem. Merv had an anxiety disorder and a noise phobia. He was in the yard when a gunshot had been fired (duck season at the time). He escaped the yard, and for him the relief of the noise ‘stopping’ only reinforced his anxiety. He developed a post-traumatic stress disorder associated with the yard – and panicked every time he was ‘trapped’ in a yard. We built a ‘new yard’ and still had the same problem. Yards were ‘scary’ in his mind and he just wanted to be inside the house where it ‘was safe’. This was fine, but we live on a farm and he is generally really dirty and wet! So inside is not always ideal!

I treated Merv with fluoxetine as a baseline medication, and clonidine for ‘departures or confinement’. He responded really well and quickly to medication – phew! Just as he was stabilising the gas guns from the vineyard next door started! He deteriorated significantly in general, requiring increasing doses of fluoxetine which again he responded well to. We were going well, and then at 2 years of age he developed a thunderstorm phobia!!!! Fortunately he was stable in general so it didn’t upset his stability overall.

When Merv was 4 years old, his anxiety in general slightly increased with duck season gun shooting again. I then started him on gabapentin BID, for both his pain control and anxiety relief. He responded really well to the addition of gabapentin.

The most important thing besides medication for Merv was him having a ‘safe spot’ that he always had access to. For him it was his bed in our garage, and loud music; whenever he would panic, I would take him into the garage, put the music on and within a few minutes he would settle completely (the noise magically disappears in there). Medication alone was not enough for Merv, and generally isn’t for anxious dogs – they need a combination of medication, management and behaviour modification.

Merv is now 6 years old and is going really well– he is on fluoxetine and gabapentin daily. About two months ago I reduced his fluoxetine just slightly and he has responded quite well to this without any deterioration.

Wow this dog has taught me A LOT about owning a ‘special edition’ dog and the work it takes.”

Managing patients like Merv, can feel like your walking blind. ‘One size’ doesn’t fit all and how to approach a regime that best fits your patients can be challenging. By managing their mental illness, you’re giving your patients a chance to have a full and enjoyable life with their owner. Let’s face it, rehoming could just make the behaviour worse, and nobody wants that.

Join us at VetPrac’s Practical skills Bootcamp and start building your ‘know how’ for helping these patients and clients.