Charles graduated from the University of Florida in 1990. He did an internship at the AMC in New York City and completed a residency and Master’s degree in surgery at Virginia Tech in 1994, achieving specialty board certification in surgery in 1996. Charles did a one year fellowship in cardiovascular research and surgery and then a fellowship in surgical oncology at Colorado State University. Dr Kunz was then professor of Orthopedic Surgery moving to Northern Virginia where he started a surgical referral practice. In 2004 he moved to Australia and is the director of Southpaws Specialty Surgery for Animals in Melbourne. He is an internship director, surgical residency advisor and program director for the American College of Veterinary Surgeons and was voted the 2011 Most Supportive Vet of the Year for all of Australia by the Master Dog Breeders and Associates (MDBA).

As a public figure and having extensively taught, spoken, mediated in the field of surgery published widely in many formats including editing the oncology section of Slatter’s Textbook of Small Animal Surgery, Dr Kunz has the honour of being accepted as a Founding Fellow in Surgical Oncology by the American College of Veterinary Surgeons for his “Exemplary Training, experience and practice in the multidisciplinary approach to the prevention, diagnosis, treatment and rehabilitation of cancer patients and his devotion to cancer research.” He is one of the first people world-wide to have received this honour.

1.How did you manage to do it all?

I have always had sort of an innovative mind. Even in high school, I was always trying to find new ways to do things. As a result, I have always loved what I do. That makes it easy. I try to surround myself with capable people and I give them opportunities to excel. That means that I can delegate and it frees me up to do what interests me. This empowers others to succeed and makes them feel trusted and depended upon.

My wife is a vet as well. She is a very well known equine internal medicine specialist and is the President Elect of the World Equine Veterinary Association. Because she is in the industry, she understands the stresses and is very accommodating of my efforts. She always pushes me to improve, particularly in the area of patient care. Whenever I get a phone call in the middle of the night from the clinic about a case, she always prompts me with questions that my delirious middle-of-the-night brain might not think of. I have an amazing team of vets, administrative staff and nurses who are an absolute joy to work with. They are all so compassionate and really funny. Work is always a laugh but they know how to buckle down when things get serious. One of my former bosses was Dr. Steve Withrow at Colorado State University. Steve is the grandfather of cancer surgery in animals. He was a great leader and inspired people to achieve. I have kind taken his example and really try to see the best in people. I encourage people to improve and try to support them with continuing education. I often invite people from the human field for in-house teaching. I try to make sure that there is no hierarchy in my practice. That makes people less territorial and also makes them want their co-workers to improve and excel as well. They are very excited about teaching each other how to do things. James Simcock, my business partner, is a great ally. I recognised his potential from the first day I met him as a visiting vet student. After short stint in primary care practice, he came to Southpaws for an internship. He ended up doing a surgical residency with me and then specialty certification. He became a business partner about 4 years ago.

3. Where do you get your inspiration to keep doing better?

I find inspiration in my desire to improve patient outcomes. I have read several books in human hospital policy and I connect with one particular author. His name is Atul Gawande. His book called “Better” is amazing. It consolidated a lot of things that we were already doing and also gave me some new ideas. My father is a retired cardiovascular surgeon and as a teenager frequently would have people tell me that he was the best surgeon they had ever seen. Even in the 70’s, when open-heart surgery was still relatively new, he did 200 sequential patients without a single death. That was record-breaking and I have always had that statistic hanging over my head as I manage my patients day-to-day.

4. What does it feel like when you have to compromise on the care of patients with cost constraints?

As a specialist, cost constraints are not as much of an issue as it would be if I were in primary care practice. That being said, there are some cases who’s treatment comes down to finances. In those cases, I try to offer a less expensive option if it is available. While the reality is that I have to run a business, I often find myself giving discounts or doing things pro-bono for rescue groups or people who are genuinely having hardships.

5. If you could change anything in your career path what would it be and why?

I would probably have been bit more serious during vet school and early in my career. I have always liked people and that caused me to lose focus at times. I never thought about specialising until later in vet school and until that point, I did well enough but didn’t really try to excel. Once I decided to specialise, it was like a light switch went on and I never really looked back. I can’t say I would really change anything dramatic in my career because any one change might have left me with a completely different wife, kids, job, etc. I am a big believer in “The Butterfly Effect” where one little change can alter the course of your entire life. One example of that is the residency-matching program. This is the way that residency candidates are assigned to programs in the US. Basically, the candidates all rank their programs and the programs rank their candidates. The computer then creates a large matrix and the match comes out the other end. If I had switched two programs in my ranking I may have wound up in a completely different place. That means that I would not have met my wife, would not have had my kids and would not have wound up in Australia.

6. Did you ever want to do anything other than vet?

I had considered at times doing medicine. I think I would have liked being a human cardiovascular surgeon, neurosurgeon or cancer surgeon. If I had not gotten into vet school a year early, I would have applied to both veterinary school and medical school the following year. Again, when my wife got a job in Michigan after our residencies, I looked at a medical school near by that would have given DVM’s a degree in just two years. We wound up in Colorado instead where I met Dr. Steve Withrow and did my fellowship in surgical oncology. Again, “The Butterfly Effect” comes to mind.

7. Why did you come to Australia?

My wife is Australian. We were living in America and visited Australia two to three times a year. I always noted how happy she was when we landed here and I decided that I couldn’t deny her that happiness. In addition, the US was politically drifting in a direction that we were not happy with including the “right to bear arms” and religious fanaticism. The last straw was when George W. Bush got elected a second time.

8. What do you like about the professional life here compared to America?

Australia was the land of opportunity for me. While I struggled initially to generate a referral base, things gradually built up and my practice grew from having a single nurse to having 4 surgeons, 5 interns, 2 dermatologists,1 visiting cardiologist, a physiotherapist, and 12 nurses. I set up the first radiation therapy until for animals in Australia and was the first vet in Victoria licensed to do CT scans. Australian vets are generally happier to do things themselves rather than refer compared with US vets. That means that when cases are referred, they are generally more serious and complicated. My caseload is much more challenging here than it was in the US.

I really enjoy connecting with the people I am teaching in a non-threatening, very accessible way. I always try to think outside the box. I think that the traditional powerpoint presentation is an ineffective way to teach. We do it because it is easy and does not take us out of our comfort zones. I prefer to teach in an interactive and humorous format where people feel very comfortable. This opens people’s minds to new ideas.

Dr Charles Kuntz will be presenting our ‘Fix The Face Workshop’, to learn more or to attend you can download the brochure here. 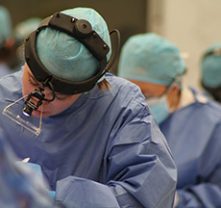