Dr. Kim Lim inspires with her passion for Canine Rehabilitation

If you’re one of the lucky people that has registered for the Canine Sports Medicine and Rehabilitation Workshop, you’ll meet Dr Kim Lim, who is an educator at the workshop. When I interviewed Kim recently, I was blown away by her passion for veterinary rehabilitation. If Kim can’t demonstrate the benefits of rehabilitation, then I don’t think anyone could!

Read on to learn more about Kim and her inspiring career in rehabilitation.

What inspired you to become a veterinarian and then go onto specialise in canine rehabilitation?

“I chose to be a vet by default; looking at a list of university courses in year 9, I had no idea what most of them were. Top of the list was actuary(?) Anyway at the bottom was veterinary science and I knew what that was. Maybe it was a bit of guilt from my rabbit having to be put down with myxo. Luckily for me, I have never regretted it. I loved pulling things apart and trying (mostly unsuccessfully) to put things back together again when young. Surgery was quite similar, but I didn’t enjoy the anaesthetic side of things (back then, I started with an in-breathing Komesaroff, no other monitoring devices etc.).

Discovering biomechanical medicine allowed me to change the biomechanics and function of the body without the anaesthetic or cutting things open. Rehabilitation was a natural extension of the biomechanics training. Sometimes it is like finding pieces of the jigsaw puzzle; you keep looking for better, more elegant ways to help your patients. I remember graduating from vet school and feeling like I never wanted to study again.

So, I did an acupuncture certification a year later because that wasn’t anything like vet school studying. It was more like the stuff my mother used to tell me; a bit of my culture thrown in, not really medicine…How wrong I was; and I have never really stopped learning since.”

What would you have done if you hadn’t become a veterinarian?

“Probably an engineer. There is a long history of engineers in the family. I have since found out that my love of fixing things is not just an engineering thing but is shared among many vets.”

In your own words, what is it about canine rehabilitation that you find interesting and that you believe general practitioners would benefit from learning about and performing better?

“I first discovered the importance of rehabilitation when a patient was presented to me four weeks after cruciate surgery. I asked the owner what she had been doing since the surgery and she told me she had been walking to the letterbox and back. When asked what else she had been doing, she replied, that’s it. That’s all the surgeon said the dog was allowed to do. I think this was the moment in 2011 when I realised I had a mission to educate my fellow veterinarians out there that just like in human medicine where they get you out of bed the day after surgery and on to a rehabilitation programme, it is not correct to cage rest or severely limit mobility of a dog after a similar type of surgery for six weeks. Another classic example is of the cruciate repair where the surgeon is happy with the surgery, healing rate etc. but the dog’s gait and posture are terrible; hind legs tucked under, kyphotic stance and no engagement and no strength from behind. Changing the biomechanics and adding rehabilitation to engage the hamstrings and release the psoas and the patient can then reap the benefits of the cruciate surgery.”

What procedure, technology, or medication have you used for a dog post-surgery or musculoskeletal injury, and realised that there was a better alternative?

“There is a common misconception that integrative/ alternative/ complementary medicine veterinarians have 2 heads or a chip on their shoulder or are just plain weird. The truth is that many of us started out wanting to be a mixed practice vet like James Herriot. However, there were things that our university taught tools were inadequate for and we kept searching for answers… The first was a Beagle more than 25 years ago. The owner reported that the dog screamed at home. On examination we poked, prodded, pulled the body all ways and got nothing. We took multiple radiographs and got nothing. NSAIDs etc. did nothing. This went on for multiple visits. Then, the owners rang and said they had taken their dog to the veterinary chiropractor down the road, Dr Alex Hauler and the dog was all better now. Apparently, it had been in the neck. A few years later, it was a German Shepherd with a sore back. I treated it with some acupuncture; he was also getting treatment at his local vet, but his back was still sore. At that time, there was a Control and Therapy article (CVE), again by Dr Alex Hauler describing the chiropractic treatment of a German Shepherd that was almost identical to the dog I was treating. It was so frustrating not having the diagnostic or biomechanical medicine skills to help this patient. A month later, I was at a Sydney Postgraduate course on endocrinology (now CVE) and Dr Doug Bryden mentioned that the very first university offered animal chiropractic course was starting at RMIT. The rest is history…”

What is the most memorable case you’ve been involved with, that resulted in dramatic improvement to the animal’s quality of life?

“I used to have a miracle a year and now I have lost count. They are not really miracles if you see the same improvement consistently over many years with many patients. There was the 14-year-old Doberman cross that did a disc in his neck and became a quadriplegic; his owner bought a stretcher and brought him in to see me. This dog got better, eventually was able to walk up the mountain/ hill behind his house and died 2 years later of some neoplasia. Another memorable one was a dog that got run over by a 4WD; he was going to die, then he was going to lose his leg… he ended up surviving; was brought in for acupuncture, biomechanical treatment and rehabilitation and after a course of treatment was back chasing the same 4WD. Some of them never learn.

At the moment, I am treating an acute polyradiculoneuritis that was presented to me 7 months after the diagnosis was made. This little dog could only move his head, not his legs…His owner had given up his job to care for his mate. He drove 3 hours to come to me when he found my website. This dog was in a bad way; there had been no useful rehabilitation or therapy for the last 7 months. I was not hopeful. Two weeks later at the second consultation, the dog is now crab crawling with his front legs and able to make weak paddling movements with his back legs; the tail is going 19 to a dozen. There are still no promises, but this is one reason why I do what I do.”

Do you have any pets?

“2 cats; a ginger and a tuxedo. The ginger’s wish in life is to be an only child- all about him 24/7. The kids have grown up and left home but there’s still one that needs his mum ALL the time. 5 bantam chickens that are the ultimate freeloaders- too fat to lay properly because they have steadily eaten their way through my orchard for the last 12 months.”

“I am not a great believer in fun. This doesn’t mean I am miserable but rather that I feel most complete when I am useful to someone or something else. So apart from my paid job helping pets, I have volunteered my time with my children’s schools for many years and then moved on to be a venturer scout leader (still stuck with teenagers; how do high school teachers do it?). I am also involved in the Australian Veterinary Acupuncture Group, the Animal Biomechanical Professionals Association (ABPA) and the teaching of the Graduate Diploma in Animal Biomechanical Medicine. I have come to realise that I am happiest when mildly stressed! My mission in life is to leave the world knowing and hoping that I have made a difference. In my ‘spare time’ I love working in my garden, commuting from A to B by bike or public transport and visiting the local library.”

Kim can be contacted at 0478131646 or [email protected]
Website: geelongcreatures.com.au

At the time of print, there was one spot left in this workshop to be run from August 30 – September 1, 2019. I’m guessing this spot will be snapped up by someone who reads Kim’s down to earth interview responses and is inspired to learn more about the rewarding field of canine rehabilitation! 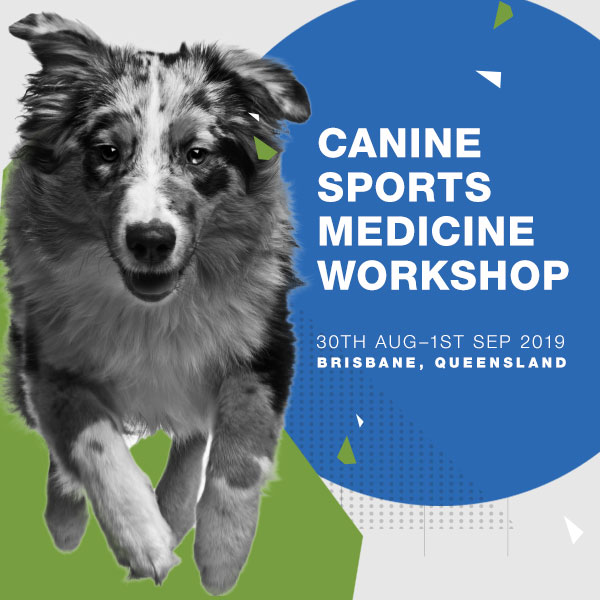 Download the Brochure for this workshop or Register Now for the final spot.